An Honest Account of Sensory Deprivation Through Float Tanks in Melbourne

I attempted to control my emotions. I was levitating freely inside a darkened tank full of skin temperature, salty water, wearing nothing but earplugs. Pretty soon, I could not feel the earplugs or smell the water’s musty aroma. There was no touch, no smell, no light and — apart from my drawing of breath and heart beating — no noise.

I was testing the new drug from North America: sensory deprivation. Throughout Australia ‘float tanks‘ have become quite popular, providing keen psychonauts with the opportunity to experience this distinctive state of being. Those in charge of the company are quick to highlight the health advantages of regular ‘floating sessions’, which include the conventional — heightened senses, relaxation, pain reduction — to the almost unbelievable (‘deautomatization’, if that is even a proper word). Do these purported advantages stand up to scientific scrutiny, or are they just hippy nonsense?

A Sensational and Sordid Past

Why would someone consent to subject themselves to sensory deprivation? In all likelihood, you have heard the scare stories: the Chinese employing restricted stimulation techniques to indoctrinate war prisoners during the war with Korea; prisons using solitary confinement as a form of psychological torture. The first research done into the impact of sensory deprivation through flotation tanks, during the fifties, at McGill University was particularly damming. It reported reduced cognitive processing capabilities, mood swings, hallucinations and panic attacks among the symptoms displayed by test subjects. Some testers even regarded sensory deprivation as an experimental form of psychosis.

Nonetheless, contrary to common wisdom, sensory deprivation does not cause irreparable harm. Doctor Peter Suedfeld, who is a leading psychologist in this field, says these ideas are wrong. “(The captives) were surrounded by overstimulation — noisy group situations, thrashings and other types of physical torture,” he explains. Likewise, the previous studies at McGill college used white light and constant noise – or sensory overload – instead of deprivation.

Actually, an assessment of more than 1000 sensory deprivation descriptions, carried out in 1997, showed that over ninety percent of test participants found it extremely relaxing. To depart from the negative associations of the term ‘sensory deprivation’, Doctor Roderick Borrie (Suedfeld’s student) renamed the experience Restricted Environmental Stimulation Therapy, or REST, in the late seventies.

These days, the two REST methods that are used most often are the chamber method, where the subject lies in a soundproofed, darkened room on a bed, and the flotation method, where the subject floats in a soundproofed, light tank in a buoyant liquid. The latter method was first devised in the seventies by John Lilly. Now, it is widely available, and this is what I chose to try myself.

Married people, or those who have weddings coming up are said to benefit from this form of stress relief. I used to do Yoga to relieve stress and, when I was searching for a Yoga centre Melbourne had many options. These flotation tanks are now being used in many Yoga centers. 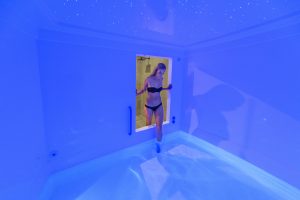 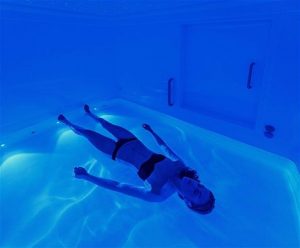 The Human Brain With no Input

Liquid Room recently launched a sensory deprivation facility in Sandringham. The rooms were far nicer than I imagined. Built to hold the average human with outstretched arms, the 48” by 90” structure nonetheless worked with just a quiet hum.

The tanks are filled with water containing Epsom salt, and warmed to skin temperature. Attempt to remain steady in the water while it settles, so I was told. That way, you will not notice the water. Before the floating, not much was said, apart from a reassuring comment that I could stop the session whenever I wanted — a statement that Suedfeld included due to test data indicating that it reduced anxiety.

I entered the float room, shut the thick door and was in complete darkness. Virtually instantly after entering the warm tank I lost my orientation. This is controlled by the vestibular system inside the inner ear. In the absence of external data, I felt as if my body was in motion, similar to hands on a clock. The feeling was so pronounced that it caused me to feel nauseous.

With no external stimulation, the brain creates its’ own. Areas of the visual pathway illuminate in abstract shapes, which gradually combine into more complicated manifestations like lines, dots and zig zag patterns. Since the introduction of brain imagining methods, researchers have had the ability to record the neural basis of this visual phenomena during sensory deprivation. One study, in 2000, showed that the visual cortex of participants was activated after less than sixty minutes of sight deprivation.