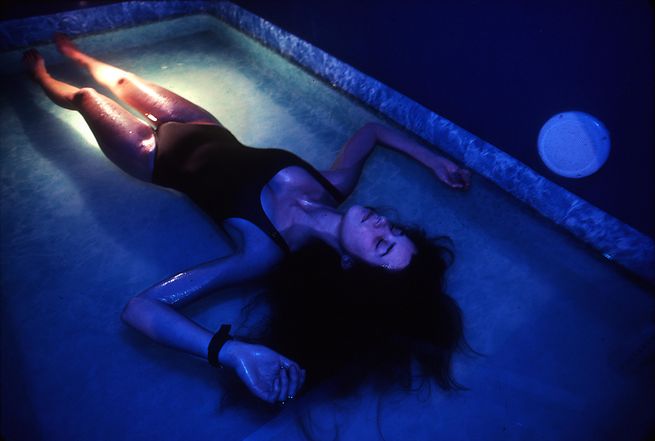 As life gets more intense ….

working and busy moms are looking for something to take them away, if just for a little while.

Teresa McAlpine struggled with sleep issues for years. At night, she would lie down tired from the day but have trouble nodding off. Thoughts racing, she would focus on work, parenting, life. Her chronic back and neck pain didn’t help, either.

“I have a brain that doesn’t shut off. I lie down, and my brain starts focusing on all this stuff that I can’t get it to stop thinking about,” says the busy financial adviser and mother of two in Sheboygan, WI. “It got to a point where I couldn’t focus during the day, and I was irritable. Doing homework with my 9-year-old, I would be frustrated when she wouldn’t get a concept. I tried yoga; I meditated. I had massages, cupping and chiropractic, but nothing seemed to quell my chronic anxiety.”

This past fall, Teresa went to a local Women in Management networking group where she heard a speaker discuss float therapy and how it changed her life. The woman described climbing into a clam-shell-shaped chamber and floating in a dark, quiet pool, feeling her mind shut off completely.

At the time, the closest float center was several hours away from Teresa, so she dismissed trying it out. This January, however, a new center popped up in her town, so she signed up for a package: 10 floats to be used over a six-month period.

It was hard to settle down during the first 30 minutes of her maiden 90-minute float. “I kept thinking: Can I touch the wall? Can I touch the bottom? Will the salt get in my mouth and eyes? But after 45 minutes, something miraculous happened: “My neck and back and hands didn’t hurt, my eye wasn’t twitching, and I wasn’t processing an endless stream of thoughts in my head.” She slept really well that night, and the effects lingered for several weeks, she says. Floating has also helped her manage pain. Recently, she was in a car accident that totaled her car. Floating has helped her heal mentally and physically, she says.

Modern float therapy—sometimes referred to as restricted environmental stimulation therapy (REST)—has been around since the 1950s when neuroscientist John C. Lilly submerged people in large water-filled tanks to see if isolation could help them attain a deep rest. (It did.) During the earliest experiments, he covered the study participants’ heads with latex masks, giving them a small straw from which to breathe.

Float therapy has changed quite a bit since then—and lost the scary headgear. According to the 2017 State of the Float Industry report, there were 193 float centers open by mid-2017, with another 250 expected to open within two years. The practice has been written up in The New York Times and GQ, and celebs such as comedian Kristen Wiig and model Elle Macpherson are devotees. Unlike the swimming-pool-like float tanks of yesteryear, today’s tanks look like pods or small rectangular boxes devoid of light and sound. Enthusiasts get into their tanks alone and lie on their backs in about 8 to 12 inches of body-temperature water with enough Epsom salt (between 25 and 30 percent) added to create buoyancy. With nearly 1 in 5 Americans experiencing anxiety, and depression listed as the leading cause of disability, it’s no wonder float tanks are catching on.

Once inside, the entire head and body float gently above the tank, a feeling Stacy Walsh, a small-business owner in San Diego, says helps her to relax immediately. “It completely calms me down,” says Stacy, who first tried floating as a way to banish anxiety about an upcoming cataract surgery. “When you’re in the tank, you don’t even feel like you’re in water. It’s like you’re in a very deep sleep state floating in nothingness.”

So far, insurance doesn’t cover floating, although there are some float centers that mix floating with massage, which means you might be able to use your health savings account to fund your float habit.

Floating-related research is still in its infancy, but a few studies suggest proponents might be on to something. A February 2018 study published in the PLOS Journal found that a mere one-hour float led to signifiant reductions in anxiety, stress, muscle tension, pain and depression, in addition to increases in serenity, relaxation, happiness, energy and overall well-being. The most anxious participants actually saw the largest improvements, and nearly three-quarters of participants reported they were more relaxed after floating than with any other treatment they had tried in the past. Another study found that floating helped anorexic women improve their body-image dissatisfaction.

With nearly 1 in 5 Americans experiencing anxiety, it’s no wonder float tanks are catching on.

** Please note that in Australia, our rate is slightly higher at 1 in 4 of Australians suffers or experience anxiety.

Researchers have also found floating to be a worthwhile treatment for chronic pain, addiction, insomnia and post-traumatic stress disorder, says Sandeep Prakash, a Ph.D. candidate at the California Institute of Integral Studies, who is investigating how floating can help speed healing.

But while researchers know there are benefits to floating, no one has been able to figure out what’s going on in the brain or why floating in a dark tank filled with salt water is so soothing. “The short answer is we don’t exactly know why it works,” explains Sahib Khalsa, M.D., Ph.D., the director of Clinical Studies at the Laureate Institute for Brain Research.

Some researchers believe the experience of sensory deprivation helps quiet neural transmitters in the brain, while others say it puts float-tank users into a deep state of meditation, which has been clinically proven to be beneficial across the board.

Float enthusiasts don’t seem to care about the science behind the benefits though. They just like the practice’s aftereffects.

“Sometimes after a float, I can work out solutions to problems I’m having or just feel like I’m less stuck in the same old routine,” says Abigail Lewis- Bowen, a director of technology at a Cambridge, MA-based parochial school. In fact, she credits floating for helping ease the transition into her current role. “It’s almost impossible to find an environment of complete calm and darkness. Even if you meditate, you’re still hearing things. Floating gave me the luxury of thinking through things without the outside intruding.” It’s been so successful that her husband tried it too.

Even with real and perceived benefits, experts concede that there are some people who should not float. Anyone who gets severely motion sick, and those with specific medical conditions such as chronic or large wounds or skin conditions, psychosis, claustrophobia, or untreated epilepsy might want to skip it altogether.

It also might take a few floats before you get used to the sensation of “nothingness,” says Cara Boyd, a hairstylist and mom of two from Macomb, MI. “I really had to concentrate on my breathing, but once I did that, I felt like I was floating down a lazy river.”

Abigail adds: “It seems like an indulgent luxury, but I know that floating has really helped my husband and me be more connected, relaxed, and focused with each other and with our children. They say you should put your oxygen mask on first—this is one way you can actually do it.”

So You Want to Float

If you’re ready to give floating a try, here are some must-dos:

Get grooming out of the way the night before.

Make sure you leave a few hours between waxing or shaving and your float session to avoid irritation or burning.

Arrive 30 minutes before your first float.

Most centers will ask you to sign a waiver, and spend time introducing you to the practice. You’ll learn how to get in and out of the tank and what it will feel like. This is a good time to ask about optional music and low lighting, which can help ease nerves.

Be prepared to shower and remove any lotions or makeup before you don ear-plugs and goggles to keep salt out of your ears and mouth.

While you’re on the subject of cleanliness, make sure you ask how (and how often) a location sanitizes its tanks. Epsom salt does kill some germs, but it’s not enough to kill everything, according to the Float Tank Association, an industry group that created standards for float-tank cleaning. There are a number of different sanitizing methods, but experts agree that tanks should be filtered between uses, and use hydrogen peroxide, ozone, UV lighting or chlorine, or a combination of the four. You’ll also want to ask if your float center has the option to leave the door to the tank open and the lights on if you’re not excited about being dropped into silence and blackness on your first visit.

Don’t be afraid to get naked.

Clothing is frowned upon at most centers since it can harbor bacteria. You might be able to wear a bathing suit, but call ahead to make sure.